THE SOUTHERN RESIDENT ORCAS ARE BEING DAMMED TO EXTINCTION 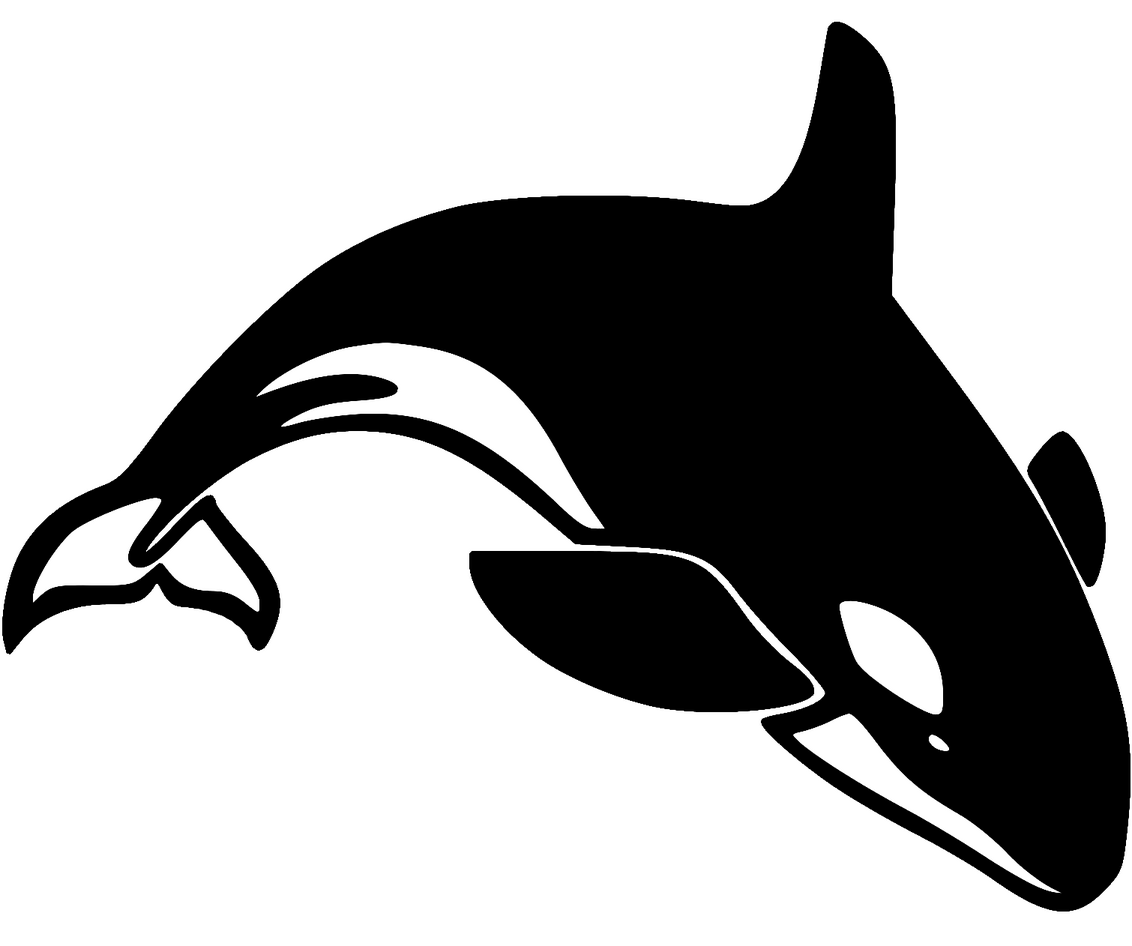 BREAKING NEWS: The United States Council on Environmental Quality is currently taking public comments (link) on the impact of the dams on the Columbia River Basin, and on breaching the four lower Snake River dams. THIS IS OUR CHANCE TO BE HEARD! A sample email can be found here, and contact information can be found here. Let our lawmakers know that it's time to breach the dams!

How You Can Help

The Southern Resident Killer Whales are a population of killer whales that live in the Pacific Northwest, primarily in the Salish Sea. Their diet consists almost entirely of Chinook salmon. Unfortunately, the Chinook salmon are dying out- and so are the Southern Residents. There are currently just 75 of these precious whales left. The nutritional stress caused by a lack of food means that many of these whales develop health issues and die young, and that most pregnancies end in failure. At least 70% of pregnancies are unsuccessful, and a majority of calves do not make it to adulthood.The Snake River, where the salmon that the Southern Residents rely on come from, is the most well-preserved salmon spawning habitat in the continental United States. The river once saw annual salmon runs consisting of over 100,000 fish. Now that number is less than 10,000, and salmon survival rates are just 0.35 - 2%. This is because of 4 hydropower dams located in the lower Snake River- Ice Harbor, Lower Monumental, Little Goose, and Lower Granite. These dams kill the salmon as they travel to and from their spawning ground. The turbines on the dams kill young fish as they travel downstream, and the dams themselves create reservoirs of warm water that confuse and sicken the traveling fish. The Snake River Chinook salmon are considered endangered, and there have been multiple attempts to protect them. Federal taxpayers spend $550 million annually (and have spent over $18 billion in total) on various salmon recovery plans, all of which have failed.These dams generate very little usable energy, and most of the energy that they do produce is simply sold as surplus energy instead. It would be cheaper and more efficient to invest in other forms of clean power instead. These dams do not provide any type of flood control, and some of the dams even increase the local flood risk. Expensive construction is needed on at least one of the dams in order to reduce this risk.The cost of breaching the dams would be minimal compared to the current costs of salmon recovery and maintaining the dams. Dam removal would eventually even pay for itself through the revenue generated from successful salmon recovery. In similar situations, salmon populations recover very quickly after dams are removed. Scientists believe that, once the dams are gone, the Southern Residents will recover as well.Unfortunately, we are running out of time. Less than half of the population is able to breed, and less than half of the babies born in recent years have survived. The Southern Residents are expected to become functionally extinct by 2035, and completely extinct by the end of the century, if we do not act now.The overwhelming consensus among scientists is that removing the dams is the only way to make sure that the salmon- and ultimately the killer whales as well- recover. We need to breach the dams.

Why should I care?

Killer whales are extremely intelligent and emotional animals. Each population has their own diet, language, and culture. Killer whales live in groups of family members known as pods, and calves spend their entire lives with their mothers. Mothers pass down their languages and traditions to their calves. Pods care for their sick and injured members, mourn their lost family, and are even known to carry the bodies of deceased whales around for days. Here are just some of the heartbreaking stories of Southern Residents. 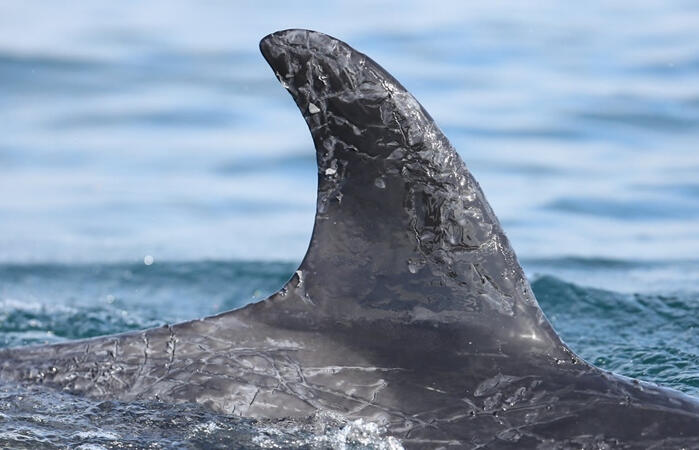 In 2016, J28 "Polaris" passed away, leaving her 10 month old son, J54 "Dipper", behind. His 7 year old sister, J46 "Star", tried to keep him alive by bringing him fish to eat- but the lack of fish meant that she couldn't get him enough food to eat. He became delirious from illness and hunger, and he stopped swimming. Desperate to keep him alive, his sister would grab his body with her teeth and bring him to the surface to breathe. This lasted for days, and his body became covered in bite marks. Sadly, he eventually succumbed to starvation and illness and died. 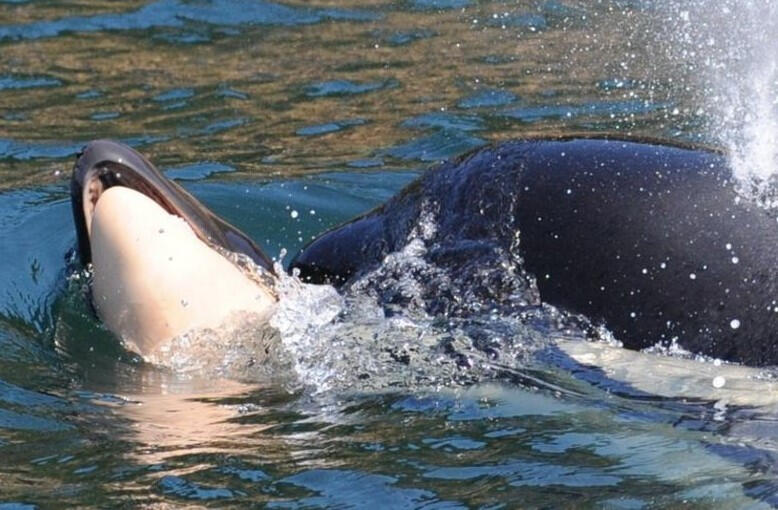 In July of 2018, J35 "Tahlequah", a female killer whale, lost her calf just minutes after birth. The grief-stricken mother carried her daughter's body for over 1000 miles on a "Tour of Grief" that lasted for 17 days. The entire time she refused to leave her daughter behind, carrying the body even when she was visibly weak and losing weight. 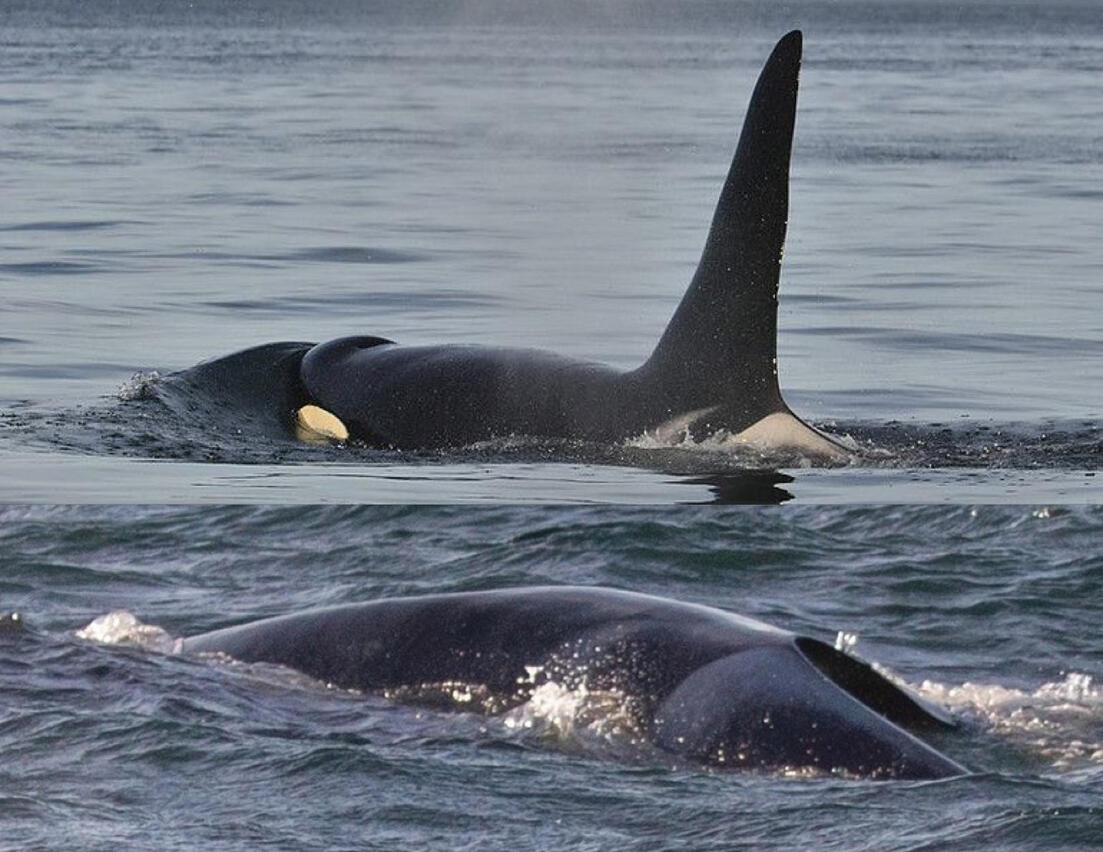 How K21 "Cappuccino" looked when he was healthy (top) and when he was spotted in July 2021 (bottom). Photo Credit: Center for Whale Research and adventuresbyhip

In July of 2021, K21 "Cappuccino", a beloved member of the Southern Residents, became extremely sick. When boaters spotted him he was incredibly emaciated. His markings were pale, and he was so malnourished that his dorsal fin had fallen completely over. He was so weak that he couldn’t even battle the current and was barely able to keep himself upright. He passed away soon after, likely later that day. 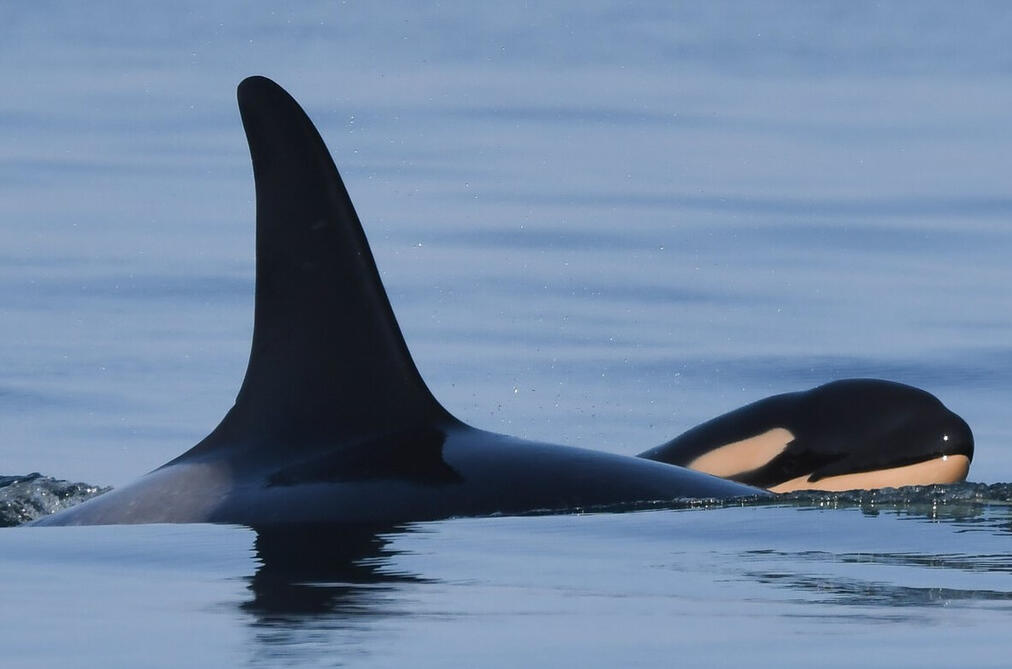 Thankfully, there is still hope for the Southern Residents. On September 4th, 2020, "Tahlequah" gave birth to a new calf, a son named J57 "Phoenix" by researchers. Only a few days later another calf, J58 "Crescent", was born to J41 "Eclipse". In January of 2021, L86 "Surprise!" gave birth to a daughter named L125 "Element". In February of 2022, J37 "Hy’Shqa" gave birth to a daughter named J59. In May of 2022, K20 “Spock” was seen with a newborn calf, K45. These births are incredibly important to the struggling population. With the dams in place, the chances of these calves surviving into adulthood are slim. In a population this small, every birth matters, and we need to protect these calves.

J32 "Rhapsody", who died in late 2014 after she failed to expel a stillborn calf. Photo Credit: Miles Ritter

See Orcas & other whales in the wild!

Owned and Operated by the Xwémalhkwu (Homalco) First Nation! 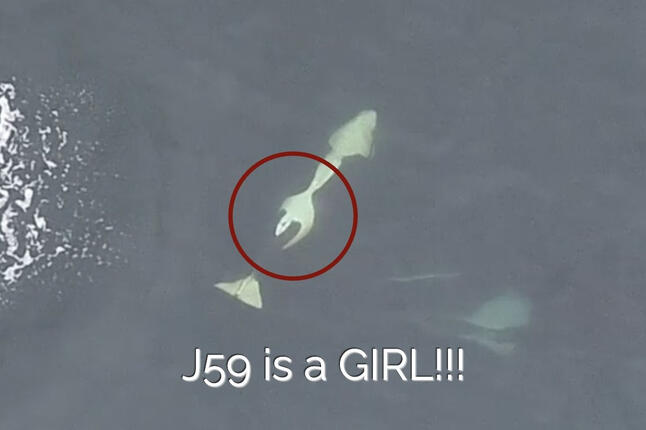 On May 26th, 2022, the Center for Whale Research announced that J59, the youngest member of J-Pod, was a female! J59 was born in late February to J37 "Hy'Shqa", and was spotted a few days later on March 1st. She is the first successful birth in J-Pod since the births of J57 "Phoenix" and J58 "Crescent" in September of 2020. While any new calves are an important addition to the population, female calves are especially valuable. The success of the Southern Residents is heavily limited by how many reproductive females there are, so a new addition is very exciting. You can read more about the announcement here! 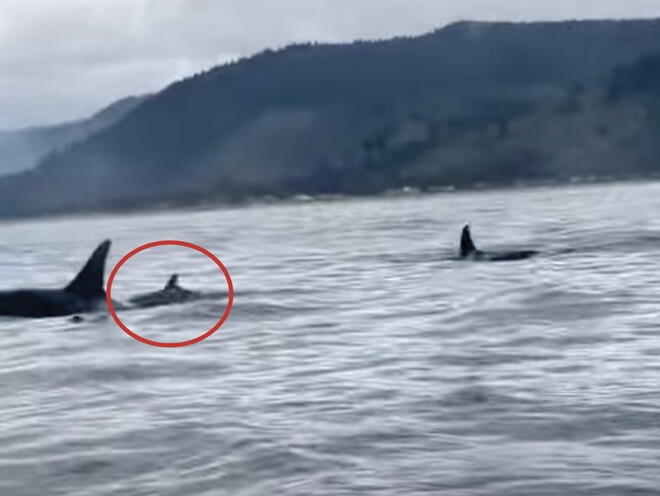 K20 "Spock" has given birth to a brand new calf- K45! Spock was first spotted with the little whale on April 28th, 2022. The Center for Whale Research announced K-Pod's new addition on May 3rd, 2022, after a video of Spock and her calf surfaced online. This is the first new addition to K Pod in over 11 years! K45 is Spock's second successful calf. Her first calf, Comet, was born in 2004. You can read more about the new calf here, and you can watch the video of the calf here! 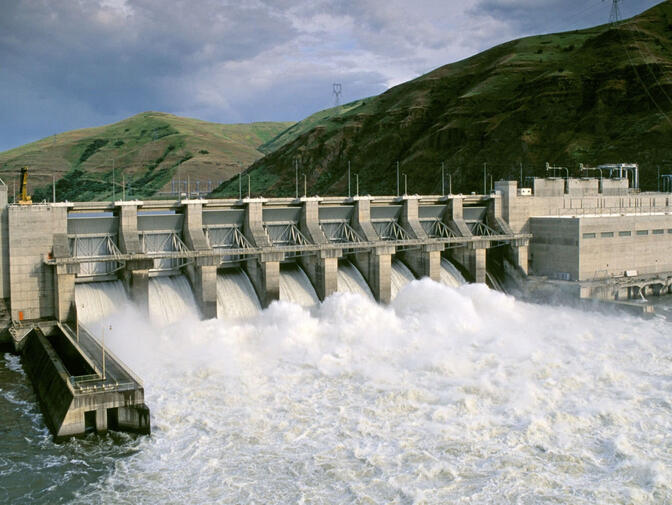 03/28/2022 - the White house is taking comments on breaching the lower snake river dams!

The United States Council on Environmental Quality is currently taking public comments on the impact of the dams on the Columbia River Basin, and on breaching the lower four Snake River dams. On March 21st, 2022, the United States Converment consulted leaders and representitives from the Tribes of the Columbia River Basin. During these meetings, the United States was asked to hold themselves accountable for the damage that they have done to the river and it's tributaries, as well as the treaties that the United States violated by constructing the dams. The United States acknowledged the damage that the dams have done to the salmon populations, and that current salmon recovery programs are not working. One of the proposals brought forth was breaching the four dams on the lower Snake River! This is our chance to be heard! You can read more about the announcement here, a sample email can be found here, and contact information can be found here. Let lawmakers know that it's time to breach the dams! 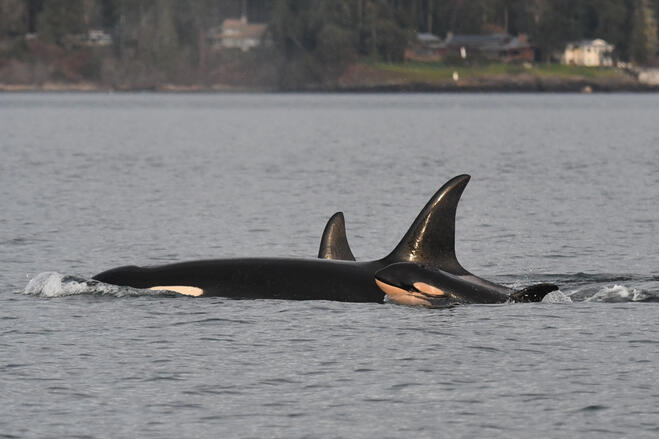 J37 "Hy'Shqa" has welcomed her second successful calf, J59! On March 1st, 2022, the Center for Whale Research announced that Hy'Shqa had been seen with a brand new calf! The new calf is the first Southern Resident birth since the birth of L125 in January of 2021, and is the first birth in J Pod since the births of J57 "Phoenix" and J58 "Crescent" in September of 2020. Hy'Shqa and her family were last seen by researchers on February 11th, 2022. She did not have a calf at that time, so J59 was born sometime after that. J59 was likely born just a few days before being spotted do to their "lumpy" appearance. You can read more about the new calf here! 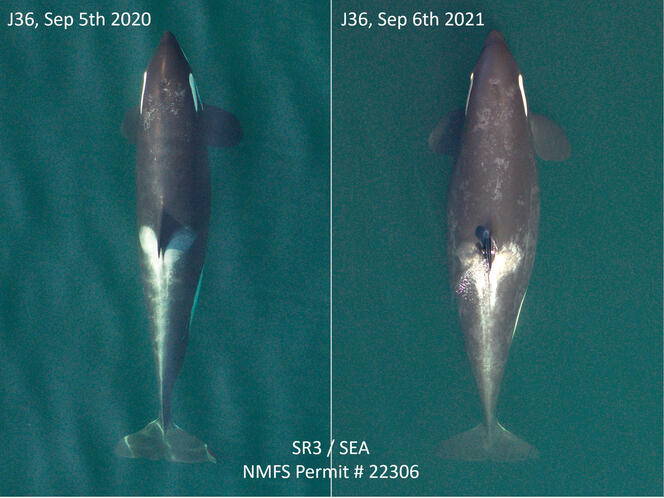 J41 "Eclipse", who was pregnant in this photo, hunting a fish. Photo Credit: NOAA Fisheries, taken under NMFS permit #19091

BREAKING NEWS: The United States Council on Environmental Quality is currently taking public comments (link) on the impact of the dams on the Columbia River Basin, and on breaching the four lower Snake River dams. THIS IS OUR CHANCE! A sample email can be found here, and contact information can be found here. Let lawmakers know that it's time to breach the dams!